PoliticsMassacre of civilians: a red legacy

Massacre of civilians: a red legacy

Ethiopia is bleeding. Ethnic groups that have lived in harmony for centuries are fighting with each other and rebel groups are proliferating across regions. From north to south, killings of civilians have almost become normal. The security apparatus is yet to reach a level where it can prevent armed conflicts and its recurrence.

From low to high level officials, they have paid little attention to the issue. Their delayed response is not only tarnishing the image of the country, once boasted as the most stable African nation, but also compromising the safety of citizens, often leading to gruesome death of civilians. The incident that happened in West Wollega is a case in point.

A massacre that claimed the lives of hundreds of innocents in just a day, has grabbed the attention of many, ranging from the spokesperson of Foreign Ministry of Iran to rights groups operating across the world. Social media users, who are concerned about the safety of citizens, are campaigning to end the violence, while calling for respect to citizenship.

Part of the messages also called the incident as a “red legacy,” a term derived and changed from this week’s campaign “green legacy,” that was initiated by the Prime Minister.

On Tuesday, with calls from the Prime Minister, Abiy Ahmed (PhD), possibly all the ministers, regional presidents and heads of several government offices were present at Entoto Botanical Garden to kick of the fourth Green Legacy initiative. In this initiative, the government plans to plant seven billion seedlings. The event, not only coincided with the killings of civilians in the country’s most populous region, but was also an event that has angered the public.

Two days after the killings, Abiy released a statement on social media account, describing it as an unacceptable act, which he referred to as illegal and irregular forces.

“There is zero tolerance for horrific acts claiming lives recently in both Benishangul and Oromia regions by elements whose main objective is to terrorize communities,” read the statement.

Members of the executive committee of Prosperity Party met last Wednesday to discuss on security issues facing the country. Led by its chairperson, the Prime Minister, and his deputy, Adem Farah, and deputy Prime Minister, Demeke Mekonnen, the committee gave direction to security bodies to intensify law enforcement operations launched against rebel groups operating in the area where civilians were killed. It was referring to the Oromia Liberation Army, which the Parliament labelled as a terrorist organization.

“The terrorists are attacking innocent civilians as they face heavy losses from measures taken by the government,” read the party’s statement.

It was right after this incident that reports started to circulate on the massacre that occurred on Saturday, June 18, 2022, in Oromia Region, East Wollega Zone, Gimbi Woreda.

An enormous number of people at Tole Kebele of West Wollega Zone in Oromia Region were mercilessly killed in a broad day light. Children, infants, mothers and elders, were all gathered in groups and were killed. Witnesses say the civilians were killed by the OLA, starting early at 08:30am, until the security officer’s came to the area late afternoon. They had been knocking on doors and killing everyone in their site, burning houses and looting belongings of farmers. 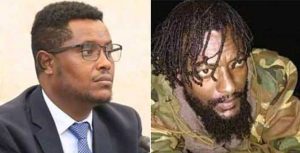 Lining up groups of children and female in 50 or 30 together, they had been shooting them, said one witness who miraculously saved himself from the incident. A huge number of people took shelter in a mosque, only to be followed and killed right in the premises of their holy places.

“This is not yours [the region], get out of here,” was all what they were hearing from the rebel groups, as Mohammed, a local resident who talked to The Reporter said. Mohammed, whose last name is withheld upon request, says he participated in the mass funeral of hundreds of dead bodies.

The resident claimed to have been living under fear for over two decades in the area. Reluctance among the local officials is what prompted him to point his finger at the regional government of Oromia for failing to protect citizens living in the area.

“There were no security forces in some areas, while they came late after the killings,” said Mohammed.

Witnesses say over 600 people are feared to have died, while there are about 2,500 people languishing in the area due to a shortage of food and shelter.

Christian Tadele, an opposition figure, claims the causalities have reached 1,500 people. A week has passed so far, neither the government nor the Ethiopian Human Rights Commission (EHRC) have come to a conclusion as to how many people have exactly been killed in the incident.

“The regional government once brought us some infested corn and we gave it back,” a witness said. “Many now don’t even have small makeshift sheds and are exposed to rain.”

The regions administration began taking measures including the imprisonment of chairperson of the Tole Kebele for alleged negligence and potential cooperation with the rebels. But for Mohamed, this does not seem to be enough.

“I suspect high-level officials are involved too,” he said.

During Tuesday’s House of Peoples’ Representatives (HoPR) session on last year’s budget audit report from the Federal Auditor General, four members of the National Movement of Amhara (NaMA) and members of the parliament stormed out after Tagesse Chafo, the speaker of HPR, refused to allow Desalegn Chanie (PhD) table the Wollega massacre incident before the Parliament.

“We have an urgent matter that the representatives should look into and discuss,” said Desalegn requesting the speaker repeatedly. Tagesse was persistent in informing Desalegn to shut his microphone off and behave as no other issue was allowed to be discussed other than the minutes from the last session.

This was the time the four representatives of NaMA left the building in protest, except Chirstian, who was leading the session as chairperson of Public Account Standing Committee at the parliament.

“My brothers, what you did today will be remembered as an action full of loyalty in the history of the Parliament,” Christian wrote on his social media later.

The Oromo Federalist Congress (OFC) also denounced the killings of civilians. It blamed the government for its lack of effort in safeguarding citizens. Citing incidents on which government forces were involved directly in extra judicial killings, the party said officials are liable for failing to hold those involved accountable.

“We have a strong belief that citizens from another ethnic group residing in Oromia deserve to live in the region with all their lives and belongings protected, same as the locals,” the statement read. “The regional and federal governments have to play their utmost roles in realizing that.”

The party’s chairperson and the popular politician who has been involved in the country’s politics for several decades, Merara Gudina (Prof.) spared no time to put the blame on the last four years’ political activities. For him, the much talked peace and security, democracy, and prosperity, have all been unsuccessful in the country.

“The very basic activity a government shall undertake is to secure its citizens from any illegal incidents as it has all the resources needed. And bringing perpetrators responsible for killings to justice should be the priority of the government but nothing of this nature is taking place,” Merara told The Reporter.

“It should be investigated by an independent entity,” he said.

The EHRC on its part has been releasing flocks of reports on the atrocities beginning in Gambella. Police officers were visibly seen in a video participating in an extra judicial killing.

In its report, after the Wollega massacre, the Commission said it is closely following the development on the attacks on civilians by the rebels.

“Following the fighting between the government’s security officers and OLA ‘Shene’ fighters, the fighters launched an attack on civilians in the area, resulting in the death of people and destruction of their livelihoods,” read the statement adding, “The residents still require support as they are still under threat.”

Previous article
Pioneer of .Africa and Ethiopia’s tech sector requests the AUC to review a decade-old injustice
Next article
Kefi minerals in a tight corner as deadline approaches
- Advertisement -