Medhin, last name withheld upon request, describes his current life as nothing short of a misery. Living inside the camp of Internally Displaced People (IDP), he is among thousands of Tigrayans taken from his home in Berhale, Afar region, to a camp in Semera five months ago. He was taken on suspicions he would side with the Tigray People’s Liberation Front (TPLF) just because he is ethnic Tigrayan.

“I was called for a meeting while I was in the middle of work when they [authorities in Afar] brought me to the camp. I am aid-dependent since then and getting sufficient volume of food is unthinkable, while we are not allowed to go out unless we pay bribes to guards,” said Medhin, adding, “It would have been at least better if our families were given a permit to visit us.”

Medhin says “many people in the camp are now sick and have not been given a medical treatment for months, while some have died even though their disease was preventable.”

It is a testimony that is also reflected in the latest report of the Ethiopian Human Rights Commission (EHRC). Led by Daniel Bekele, former executive director of the Africa Division at Human Rights Watch (HRW), the Commission went to the place where Medhin lives after receiving reports of human rights abuses inside the IDP camp in Afar region.

Its findings showed that IDPs were taken from three small towns bordering Tigray. Officials justified the action saying “the detention targeted people involved in criminal activities,” but the commission called the measure “an ethnic based arrest.”

“The detainees in Semera and Agatina camps in Semera, Afar Region, should be released immediately, as the action is illegal and is an arbitrary detention. If there are people who want to stay in the camp until they return to their place of residence, it should be done voluntarily and without any restrictions,” Daniel said.

Such a treatment is not new to Tigrayans. Started with derogatory terms, such as Yeken jeb, even used by some officials of the federal government, their condition evolved from bad to worse in the last three years. Ethnic profiling is the least Tigrayans endure, with droves falling victim to mass killings as well.

The story is no different for their neighbors to the South, the Amharas. In the last three years, the Amharas were also subject to rape and mass killings in their own region and other parts of the country, including Oromia, Sidama and South regions.

From Maykadra, where 229 ethnic Amharas and Tigrayans were killed, and Gura Ferda to Tole Kebele, where over 300 ethnic Amharas were murdered by armed groups, Amahras, especially those living outside their region, have fallen victim to rape, forcible displacement, mass shootings and ethnic violence in the last four years.

Unfortunately, these are not the only problems citizens face in today’s Ethiopia. A drought is threatening the lives of eight million people, a worrying situation occurring on top of a famine that has put the lives of over half a million people in Northern Ethiopia at risk. 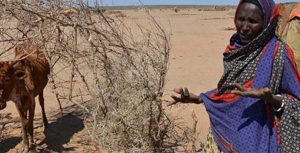 More than eight million pastoralists and agro-pastoralists in Somali (3.5 million), Oromia (3.4 million), SNNP (one million) and South-West (more than 15,000 people) regions, are currently affected by drought. Of that, 7.2 million people need urgent food assistance and another 4.4 million people are suffering from acute shortage of water. They have also lost their treasures, cattle’s.

Nearly 2.1 million livestock have died, while at least 22 million are at risk, very weak and emaciated with no or little milk production, the main source of nutrition for children, according to the UN OCHA.

“Each of the people I spoke with was clear: this crisis is threatening both their lives, and their way of life. They need the world’s attention and action, now,” said Martin Griffiths, the Under-Secretary-General for Humanitarian Affairs and Emergency Relief Coordinator, when he concluded a two-day visit in the Horn of Africa, including Somali Region of Ethiopia, where he saw the devastating impact of a fourth consecutive failed rainy season in the Horn of Africa.

Children are suffering too. In Afar, according to the UN OCHA, malnutrition rates are increasing with a 30 percent increase in admissions of severely malnourished children in March and a 28 percent increase in April, an outcome of the war in Northern Ethiopia.

In Somali region, one of the worst affected by drought, over the past 12 months, malnutrition rates rose by 64 percent, with an increase of 43 percent between January and April 2022 alone, the same source said. Admissions for treatment of malnutrition have surged by 320 percent in the region.

“Sadly, in 2022, the crisis in Ethiopia grew in complexity and scale. In the south and the east, prolonged drought is devastating lives and livelihoods. In the north, millions of displaced families barely have access to food, health services, livelihoods; and in the southwest, a hidden conflict is displacing hundreds of thousands,” said Xavier Joubert, Save the Children’s Country Director in Ethiopia.

The situation in urban parts of Ethiopia, where the security situation is relatively stable, is no different for citizens.

Galloping inflation is already disrupting the lives of many living in Addis Ababa and other areas. Extreme poverty is growing, with the price of every food and non-food commodities increasing at an alarming rate with no end in sight.

Accessing basic services, including medical, have almost become impossible, as citizens are left with a small amount of money, after spending most to buy food and pay rent.

“Jobs are scarce than ever, as there is a slowing business activity, while living cost have already become unbearable,” said Kumlachew Getiye, a daily laborer, hoping for a brighter future for his country. “I think all the challenges we are facing lately is the outcome of the civil war, which I believe is ending as everyone seeks the path to peace and reconciliation,” added Kumlachew.