It was a dark Monday. On July 04, 2022, Mohammed, whose last name is withheld upon request, has lost many of his friends, relatives and loved ones who have lived in Qellem Wollega, Oromia Region, for decades. It was not because of a natural disaster or due to an accident but rather a mass killing that claimed the lives of over hundreds of his neighbors. All of them belong to the same ethnic group, Amhara.

The attack, which families of victims and the government say is perpetuated by the Oromo Liberation Army (aka Shene), started in the early morning of July 3, 2022. A tactic used in previous mass killings that occurred in the same Zone, it began as soon as the men left their homes to cultivate their farmland.

“Immediately after the men left for work, Shene started killing everyone in the neighborhood, including an infant and a mother who was breastfeeding her baby,” said Mohammed, who recently turned 30.

His family were born in Wollo, Amhara Region, but relocated to Wollega in the 80s during the military regime to escape the famine that killed hundreds of thousands of people.

“My family might come from Wollo. But they lived here for almost four decades and it is a place where I was born, raised and married. I have nowhere to go,” added Mohammed, begging the federal government to stop the killing.

This is not the first time when Wollega Zone erupted in violence. Both the eastern and western parts of the Zone have been a center of attention for the last four years. Children were orphaned, civilians and mothers were killed. Ethnic Amharas, who migrated to the area during a resettlement program of the Derg Regime in response to the famine in Northern Ethiopia, became a victim of unimaginable cruelty.

Villagers that called for a meeting have been hunted down by armed groups. Houses built by farmers with meager resources were burnt down to ashes and thousands have been evicted from their home.

The blood of over 320 victims killed in an attack launched by the OLF had not even dried when Prime Minister Abiy Ahmed (PhD) tweeted citizens living in Qellem Wollega have been massacred.

“Shene group members fleeing from attacks by (government) security forces are inflicting danger on citizens in West Wollega,” Abiy said in a tweet on Monday, adding operations are under way to chase the rebels.

The latest killing is the continual of the tension evident in most parts of Oromia since last month. There were other events that involved OLF-Shene in North Shewa and remain unreported as the killings in Wollega received more attention.

On the first day of the clashes, 13 militants, including a military commander of the rebel group, were reportedly killed. The OLF-Shane, in response, started to target civilians in Hamuma Gindo, Ginde Berbere, and Babu Dire kebeles of Dera woreda, the same source added.

“An unknown number of civilians were reportedly killed as a result,” said the ACLED. 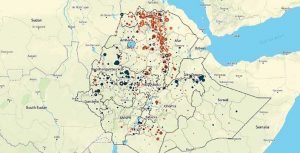 “The group burned houses and abducted children. The casualties due to this attack are unknown,” ACLED revealed.

Officials including Abiy believe such a problem is a global challenge evident even in the western world that is well equipped with strong law enforcement bodies to respond to such a crisis.

“Every day 300 to 400 people killed in Ethiopia is nothing if we see how many get killed every minute in western countries,” said Abiy, while responding to the questions MPs forwarded on a session held on July 07, 2022.

Abiy made this remark after expressing his condolences to civilians who have been struggling to improve their livelihood. “We are deeply saddened as a nation and as a government for not being able to save their lives,” said Abiy, adding, “Law enforcement agencies are exerting the maximum efforts to take action against any group, be it Shene or any other that spill innocent blood.”

The Oromo Liberation Army, first linked with the legally registered political party, the Oromo Liberation Front (OLF), became stronger in the last four years. Before its leader, Jal Merro, cut ties with the OLF which is now being led by Dawud Ibsa, the Front was based in neighboring countries, particularly in Eritrea, which hosted the combatants for over two decades.

“We have not seen any attacks in our entire life here in Wollega before they were allowed to enter in Ethiopia when Abiy came to power,” said Mohammed.

Exiled to Eritrea ever since the then Ethiopian People Revolutionary Democrats (EPRDF) sidelined them, the combatants were allowed to enter into Ethiopia in August 2018, through Tigray after Dawud signed a peace deal with the Ethiopian government.

While the combatants joined camps to receive training right after they returned to the country, the treatment by those administrating the camp was said to be the reason that pushed those who were yet to be disarmed to lose interest in making peace with the government.

“Jal Merro was first receiving orders from Dawud but the treatment of the fighters in the camp, with some even being poisoned, killed the interests of the OLF combatants entering the country to be disarmed and make peace with the government,” said a former official of Oromia.

“And Jal Merro and his allies used this as an advantage to expand their influence in the region. The Qerro protests helped them recruit more fighters. At a certain point, an area that is almost equal with the size of a zone was under the control of OLA,” added the official.

The Tigray People’s Liberation Front (TPLF), which has never been at peace with the combatants while leading Ethiopia for over two decades, also saw the situation as an advantage to weaken the federal government.

Officials of the TPLF first denied claims they were supporting OLF fighters before the war but the two officially struck a deal last year to overthrow the government militarily. The two agreed to share battlefield information back then but unconfirmed reports that circulated on social media in the last few months suggest a deteriorating relation after the forces of Tigray left Amhara region and begun peace talks with the federal government.

Both groups have not disclosed the status of the deal.

The negotiation that started between the TPLF and the federal government does not include OLF-Shene. There are also no plans to bring their military leaders to the negotiation table. And it seems Abiy wants to continue fighting.

“OLF Shene has no objective. They want to destroy Ethiopia. If we fight them in unity, we will be successful,” Abiy said.

Some members of the party that he leads are seeking internal reform, as they point fingers at officials of Oromia. They claim they are allegedly supporting OLA-Shene combatants to end their political objectives.

“The security situation in Oromia has deteriorated for the past three years. Our people have suffered more than ever. Fiction is being written and told upside down to distort the truth. Solving the puzzle by ensuring accountability is a matter of survival. A failure to do so will make the danger out of control,” said Taye Dendea, State Minister for the Ministry of Peace.

Experts are also urging the government to ensure accountability.

“Violence is partly an outcome of a lack of accountability and in Ethiopia’s case, the judiciary, whom we trusted to ensure those who violated the law will be brought to justice, unfortunately fell prey to politicians. The same is true for law enforcement bodies, which are yet to be independent from politicians and is subject to ethnic bias,” said Tarekegn Abera, a lawyer with decades of experience in Ethiopia’s legal sector.