BusinessHow safe is your money in banks?

How safe is your money in banks?

Saving is a luxury for most Ethiopians. An economy characterized by a galloping inflation, which has reached 37.2 percent last month, the highest in over 12 years; Ethiopia does not have a banking industry conducive for anyone wishing to save their leftover. The real interest rate in the country now stands at negative 30 percent, indicating the unprofitability of saving one’s money. If an individual saves 100 birr this year, its real value for next year would be 70 birr.

Such a situation is not new. It has existed for over a decade, as there was not a time when interest rate on savings stood above the inflationary pressure. Yet saving was not disappointing as many feared. Until the end of the last fiscal year, outstanding deposit of commercial banks stood at 1.3 trillion birr, enabling financial institutions declare a record-high profit year after year with no end in sight.

Though this is a fruit of an aggressive expansion of banks in urban areas, the deposit trajectory is the result of the public confidence on financial institutions. People put their money in banks, neither to earn a saving nor aiming for credit, but for safety reasons. Officials at the National Bank of Ethiopia (NBE) fear this may vanish, as a new study conducted by a team of prosecutors at the Ministry of Justice surprised many in the banking community.

The assessment discovered that commercial banks lost almost two billion birr because of fraud in the last four years. Armed with a capital of over 153 billion birr, this may not be a big figure for the banks to endure. Yet it is not something that they can ignore easily.

“When fraud becomes common, it will erode the confidence of people on banks,” said Melaku Kebede, chief executive officer of Hibret Bank, in an event organized by the Attorney General at Sheraton Hotel.

How could this happen?

The market leader with a share of almost 50 percent in the deposit market, the Commercial Bank of Ethiopia (CBE) is the biggest loser among the 16 financial institutions that were a victim of fraudsters. Of the 155 court cases involving fraud, almost half targeted the state giant. The figure is more petrifying.

Out of the 1.8 billion birr lost because of fraud in the banking industry since 2018, the share of CBE, which is armed with a paid-up capital of 40 billion birr, was almost one billion birr, money enough to meet the regulatory requirements needed to establish at least seven insurance companies. It would have been enough to establish two banks if it was last year before the central bank raised the minimum requirement to five billion birr.

Bank of Abyssinia (BoA) is the second biggest loser. The second most profitable private bank next to Awash, BoA has lost 328.9 million birr to fraudsters. It is a little lower than what its major shareholders can own, supposing that won’t be anywhere above half a billion birr as the Bank’s paid-up capital increased to 10 billion birr this year.

Oromia Bank is the third highest victim. It has lost 161.8 million birr.

Either for the banks or prosecutors following up the cases, the findings are not surprising. “This is just the tip of the iceberg,” said Gebregizabher Woldegebriel, a prosecutor who has been leading the assessment conducted on banks with a sample size of 155. “If we discovered such a staggering figure with a small sample size, imagine the volume when everything is aggregated.”

Fraudsters used different techniques when they misappropriated the money from banks. The lion’s share of fraudulent activities committed involve fake cheques, while that is followed by mobile banking and direct withdrawal from bank accounts. Such illegal activities usually involve more than one person. In the case of cheques, for instance, banks require their employees to double-check whether the drawer wrote the cheque to the payee before paying the money. It is an every-day practice but some do it differently.

“Some cooperate with ethio telecom to make the drawers number out of service. And then they withdraw the money without hustling much. There are also bankers who were tricked by fraudsters with fake cheques,” Gebregizabher added. 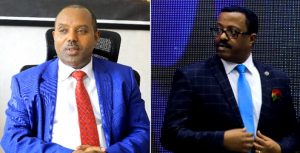 The Document Authentication Registration Agency (DARA) is equally blamed for having its own share. “Some present fake document with a seal of DARA, which makes it difficult for us to verify because some of their employees are involved too,” said a banker working at one of the private banks.

Melaku suggests third parties should be held accountable if the case involves their employees. He believes banks must not be the only entity that should be held liable while compensating individuals who have lost their money due to fraud.

“Liability damage has to be transferred to third party, if they breach our trust and their employees are involved in fraud activities,” said Melaku.

His statement comes out of frustration as banks are obliged to compensate their employees if they become victims of fraud. But this may not happen always. Sometimes the case might take years if prosecutors suspect account holders or the alleged victims are involved in the fraudulent activities.

Abie Sano, President of CBE, the prime victim, says his bank pays the amount immediately after checking the customer is not involved. “We compensate customers immediately as soon as discovering the fraud, as the failure to do so would cost us public trust,” said Abie, while sharing his concerns over the surge in fraudulent activities.

But bankers say this is a little far from the reality.

“Customers may wait for years after losing their money to fraudsters, if the Bank takes the case to civil court, in a bid to get sometime and pay less, a situation that is killing the interests of savers,” said the banker.

Different studies indicated that saving is way below it should be. Inflation might be the big factor here but the contribution of losing confidence on banks cannot be overlooked too. Not only they pay an interest much lower than the market rate but customers had to pass through a lot of challenges to withdraw their own cash if the amount is big. Investors, traders and several businesses had to wait for days to withdraw money as banks faced a liquidity shortage.

The worst is yet to come

It is not news that the world is experiencing more fraudulent activities than ever. Aided by the advancement of technology, fraudsters have continued to misappropriate billions of dollars from banks and their customers. The Global Economic Crime and Fraud Survey 2022, conducted by PWC, found out that cybercrime accounts for over 36 percent of fraudulent acts. It is followed by customer fraud and asset misappropriation with a share of 26 and 25 percent, respectively.

Of all types of major customer fraud, the most dominant one is credit card fraud, which Ethiopia is yet to experience as its payment system is yet to be liberalized fully. A study conducted by Morning Consult IBM on fraud cases reported in Brazil, Germany, Japan, the US, China and Singapore discovered that credit card accounts for a third of frauds involving financial institutions. It is followed by bank account and debit card fraud.

Yinager Dessie, governor of the central bank, is also watching the rising trend of frauds across the world. “Though it is not complex as it is globally, we are facing similar problems. Seeing what is happening globally make us concern more on how things would be in the future.”

Abie believes the law should be stringent to prevent more frauds.

“Anyone should be held accountable for their actions if they found guilty of involving in such crimes. That is going to be a learning curve for anyone thinking of amassing wealth through fraud,” said Abie.

But the reality on the ground is not easy as he suggested. Prosecutors accuse banks and third party institutions for hiding evidences to protect the name of their institutions.

“Banks are equally responsible for the rise in fraud, as they sometimes stash away evidences from us to avoid compensation if the case is taken to the court by the person or entity alleged to be the victim of fraud,” said Gebregizabher.

“When our branch managers try to take the case to nearby law enforcement agencies, they don’t get a quick response, even face rejection in some cases. So it is not easy to get justice even if fraudsters are caught while committing the crime and police is present on scene,” said Abie.