In DepthAnother war, another pain

Another war, another pain

August 24, 2022 dawned with the same unexpected element as November 4, 2020. Both days heralded the breakout of war in northern Ethiopia, catching the international community off-guard. 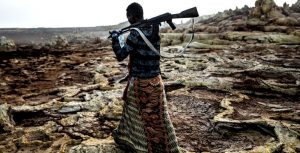 Though all wars are bewildering, the latest in northern Ethiopia is at odds with the months of teasing to sit for a negotiated peace resolution. Militarism remains an option as a response to the political fallout, even though both the Ethiopian federal government and the TPLF have been negotiating peace and ending the two-year conflict that has devastated the country.

Heavy fire was exchanged at 5 a.m. on Wednesday between towns in Tigray, Amhara, and Afar, including Kobo, Bisober, Wetwet, and Zobel. These places are largely located in the southern part of Tigray. But the weight of the war is expected to take place in the western part of Tigray, where Welkayit, a major contentious bone that has been an obstacle to the peace negotiations, is located. Apart from its fertility, it is an outlet to Sudan, a heart valve for the Tigray People’s Liberation Front (TPLF). A decoy war is also launched on the Afar front, according to sources.

Just like in the November 2020 war, both the federal government and TPLF rushed to statements claiming that the war was restarted by the other side and that it was acting in self-defense. Of course, the latest war only differs in scale, as minor clashes and skirmishes have been underway, even after the TPLF retreated from Amhara and Afar and the federal government decreed a humanitarian truce, five months ago.

Even though the TPLF reciprocated the federal government’s unilateral ceasefire decree, there was no binding agreement signed between the two as a mandatory ceasefire.

“The TPLF committed the third mistake and launched a war. This time, we will deploy our full force,” said the commander, calling for regional forces of Amhara and Afar to stand up along with the ENDF, like in the previous two wars.

There is contradicting information over the news of the interception of the military Antonov. While the ENDF officials stated the aircraft was shot down while entering the Ethiopian border via Sudan, Redwan Hussein, national security advisor to the Prime Minister, tweeted it was hit while at Mekelle airport. The news of the interception is not verified by independent reports.

Debretsion Gebremichael, president of Tigray regional state, wrote a letter to the UN, AU, IGAD, and other organizations on August 23, 2022, stating that the federal government is beating the war drum. However, a day after the war began, WFP chief David Beasley accused the TPLF of stealing 570,000 liters of fuel, which TPLF officials claimed was previously loaned to the humanitarian organization to deliver aid in the region.

According to analysts, the TPLF’s major target now is not Addis Ababa.

“The TPLF wants to break out of the blockade of ENDF and access an outlet to the outside world. They want to create such an access route via Gondar to the Sudan border. They believe Fano around Gonder is weakened now, which they are trying to capitalize on,” said a political analyst who closely monitors the issue.

“The TPLF cannot access the Sudan border via western Tigray because Eritrean forces would not give an inch since they are close to western Tigray. Neither can the TPLF try through Afar, because it is a humanitarian aid and logistics route, which exposes the TPLF,” said the analyst.

Antonio Guteres, UN director general, is the first to express that he is shocked that war broke out again between TPLF and the federal government. AU, IGAD and humanitarian agencies also issued statements saying that another round of war means deepening the scar for the nation. Apart from the fear that the war poses Ethiopia to other internal and regional security threats, geopolitical destabilization as well as the region’s refugees, IDPs, and drought-affected areas, which is already beyond the international community’s capacity, are also major concerns. 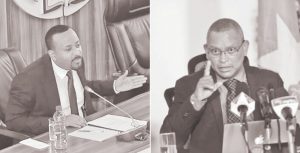 “We call on the government of Ethiopia and the TPLF to redouble efforts to advance talks to achieve a durable ceasefire without preconditions and ultimately bring a permanent end to the conflict,” stated Antony Blinken, US Secretary of State on August 24.

But as much as the international community was bracing for the peace negotiations, they were also aware of the preparations for another round of war, according to insiders.

What happened to the peace deal?

Over the past month, the international community and the US embassy in Addis have been pushing both sides to disclose the time and place and immediately embark on peace negotiations. The push was mainly aimed at averting a third round of war, which had become imminent. Even though the two parties appeared to be preparing for the negotiation, there were major disagreements underlying conditionality principles.

In its first statement last week, the Committee underscored the need to conclude a ceasefire as soon as possible. It also adopted a peace proposal that would lead to the conclusion of a ceasefire and “lay the foundation for a political dialogue.” The committee stated that the issue of Tigray will be resolved partly under the AU-led negotiation and partly under the National Dialogue initiative, which is led by a new commission and is expected to kick off soon.

The TPLF has been insisting that it cannot sit for the peace negotiations unless the federal government resumes basic services in Tigray, including electricity, telecom, border trade, banking and allowing adequate fuel to transport humanitarian aid stocked at Mekelle, among other conditions. TPLF also has been rejecting AU-led negotiations in favor of negotiations led by Uhuru Kenyatta under the watch of the US and the EU.

After special envoys of the UN, EU, US, and ambassadors of Italy, Canada, and UK visited Mekelle and reported to the AU two weeks ago, the peace process was almost on the right track, as western partners also agreed to an AU-led negotiation.

Officials from the TPLF have stated that they will use military force to break the ENDF blockade unless the government restores services and ensures a sufficient supply of humanitarian aid. Humanitarian agencies have been reporting that supply has been much lower than needed in Tigray. Some also say the federal government allowed aid supplies, but only on a small scale, to force the TPLF to come to terms.

Experts on conflict management say if both the TPLF and the government of Ethiopia really have an interest in peaceful resolution, they have to sit for negotiations with all their differences.

“The first step of negotiation is sitting down to discuss, with all the reservations. The TPLF declared that it would take part in the talks provided that essential services are restored and the problem with western Tigray is resolved. On its side, the federal government stated that it might hold negotiations while voicing doubts over the cease-fire deal. The AU then records the reservations and tries to solve it through the negotiation process” said a human rights advocate and conflict management expert.

The expert asks “How can you expect to reach any agreement before sitting down for negotiation? This only indicates both were using the negotiation only as a lip service and were readying for war.”

Debretsion’s letter to international organizations the day before the war clearly stated that the TPLF and the government had previously held face-to-face meetings. “We have conducted two rounds of confidential face-to-face talks with senior military and civilian officials of the government of Ethiopia and reached understandings on a cessation of hostilities and the lifting of the blockade on essential services to Tigray. These facts were conveyed to the UN and international envoys,” states the letter. The confidential discussions took place in Djibouti and Seychelles, according to insiders.

Still, there are arguments about whether the third war is waged just to have more leverage before sitting for negotiations or to actually fight a major war. But there are sufficient grounds to conclude a full-scale war is eminent. Insiders say both parties have been indulging in peace negotiations as a part of deception while preparing for war.

But if the war continues, more conflicts are expected to erupt in Ethiopia. “If the war continues, other internal and regional war groups will create alliances with the TPLF. If Ethiopia remains embroiled in a civil war, the OLF, al-Shabab, Egypt, and other insurgents and opposition groups will benefit. The ENDF will be overstretched,” said the political analyst.

“This will leave Ethiopia like Libya or Yemen, where everybody fights against each other in an all-out-war. This war will be a big crisis and loss for Ethiopia. The federal government should put this in the balance. It must be wise and handle the TPLF peacefully,” the analyst added.

Many expect external intervention to stop the war.

“The AU has no power to do so. Obasanjo also does not have the assertive power to order both sides to stop the fighting and come to the table. The US and the EU might start imposing sanctions, but sanctions work only on the federal government and not for the TPLF. You cannot put sanctions on humanitarian aid,” said the conflict management expert.

Reconciling the political fallout between the TPLF, the former ruling party, and PM Abiy’s new administration, which took power in April 2018, has gone beyond party level disagreement and remains a threat to the state. The outcome also remains devastating and costly for the nation, as well as the Horn of Africa’s geopolitics.

The cost of lives lost in the war, as well as refugees and IDPs, wreaked havoc on the humanitarian system. According to reports, close to half a million people died in the previous rounds of war, mostly from the TPLF’s side alone. Child soldering is also another growing concern on TPLF’s side. The Afar and Amhara regional states have also sacrificed lives in this war.

Since the war broke out in November 2020, Ethiopia has lost a substantial portion of its economy to the war. According to the PM’s report last year, during the first round of war alone, the federal government threw over 100 billion birr into the war. This does not include the resources thrown into the war on TPLF’s side, which is also part of Ethiopia’s resources.

Overall, economic growth has slowed down since the war, from around nine percent to six percent. Amhara, Afar, and Tigray regional states, have turned from producers to recipients of aid.

For instance, rebuilding the education facilities damaged by the wars will require over USD 2.2 billion, according to a recovery document prepared by the Ministry of Education and disclosed a few weeks ago.

Production could not come to the central markets due to the security threats to logistics. This has fueled a supply-side shortage, making the economy inflationary. The government is also forced to print money to finance the war, which in turn is also exacerbating the inflation.

Externally, the war scared off Foreign Direct Investments (FDI). The US also called off Ethiopia’s eligibility for Africa Growth Opportunity Act (AGOA) benefits, a decision that has so far made over 5000 factory workers jobless. Apparently, sanctions have also drained Ethiopia’s access to external financial sources, depleting the foreign currency reserve, which dropped to covering 1.7 months of import bills as of July. Of course, it dropped to 1.3 months six months ago, just before the government declared the unilateral ceasefire.

“From the beginning, both the federal government and the TPLF entered into war with political ego, and unwise insights. The war created a huge crisis. Again, I cannot say they will refrain from another long war. All the heavy military exchanges and bad propaganda indicate this is not a short war,” said the human rights advocate and crisis management expert.