A startling revelation regarding the war in northern Ethiopia was announced last week by the International Commission of Human Rights Experts on Ethiopia, an independent organization tasked by the UN Human Rights Council with conducting a thorough and impartial investigation in Ethiopia. The stern warning emerged after the organization released a study that stated there are reasonable grounds to believe that parties to the conflict had violated and/or abused human rights since combat began in November 2020.

It was a report that not only angered federal government officials but also countries and experts that had already questioned the mission and real interests of the recently formed committee of experts.

“The report of the commission is prepared in defiance of the UN best practice guidelines such as professional independence, impartiality, and standard of proof,” said Tadesse Kassa (PhD), secretariat of the inter-ministerial taskforce that was formed by Prime Minister Abiy Ahmed, slamming the UN Commission of Human Rights Experts report of human rights violations in the northern Ethiopia war.

At a press conference held on September 21, 2022, he referred to the Commission’s initial report, which was created with only two full-time human rights investigators and remote interviews, as nothing more than mediocre. At the press conference, the Ministry of Justice unveiled the task force’s first phase report, which was prepared by 158 experts deployed in the conflict-affected Amhara and Afar regions.

In its first phase investigation report, which covers violations committed by the Tigray People’s Liberation Front (TPLF), the inter-ministerial taskforce (IMTF), formed to implement the recommendations of a joint investigation by the Ethiopian Human Rights Commission (EHRC) and the UN Office of the High Commissioner for Human Rights (OHCHR), presented its findings.

The Task Force found reasonable grounds to believe the commission’s findings that there were 2212 rapes, 2831 extrajudicial executions of civilians, and other violations during the war. According to its 46-page report, the team came to this conclusion after analyzing the testimonies of 10,000 witnesses and analyzing thousands of videos and material evidence.

For Tadesse, who has been monitoring the task force’s research and report-writing process, the UN Commission of Human Rights Experts’ report on Ethiopia is only a “snippet” of the full extent of the damage that has been inflicted throughout all three regions.

“The report’s conclusions are presented on the basis of either no evidence or evidence whose credibility is highly questionable,” the secretariat told the room full of reporters questioning the report in regard to its standard of proof and data collection. Tadesse even went on to call the report “a political statement” that was prepared to “help implement” the agendas of “some forces.”

This week, the commission accused all combatants in the conflict of committing various human rights crimes. In order to reach the conclusion that there are “reasonable grounds” to suspect that the offenses amounted to war crimes and crimes against humanity, the Commission listed incidents that it employed as a basis.

The selected incidents were the shelling of Mekelle and attacks on civilians and civilian objects; killings in Kobo and Chenna; and a drone strike on an Internally Displaced Persons (IDP) camp in Dedebit. Rape and sexual violence, and denial and obstruction of humanitarian access were also selected themes for the investigation.

The commission’s two-month investigation into selected incidents and themes found “reasonable grounds” to believe the Ethiopian National Defense Force (ENDF), Tigray forces, and Eritrean Defense Force (EDF) committed war crimes, according to the report. In this case, the report accused the ENDF of using “starvation of civilians as a method of warfare.”

It further stated that it found “reasonable grounds” to believe extrajudicial killings, rapes, and sexual violence were committed by ENDF members “as part of a widespread attack” directed against “the civilian population of Tigray.”

The accusations were part of a joint investigation by the Ethiopian Human Rights Commission (EHRC) and the UN Office of the High Commissioner for Human Rights (OHCHR) that was adopted by the federal government.

The federal government, on the other hand, blasted the commission’s report, adding that it had opposed its formation from the start. It described the report as “substandard quality” and its allegations as “unsubstantiated.”

“It makes grave accusations against the government and its armed forces without offering proof, just based on telephone conversations and web-based submissions. This is irresponsible,” Zenebe Kebede (Amb.), the Permanent Representative of Ethiopia, told Federico Villegas, Human Rights Council president, at the Interactive Dialogue with the commission on September 22, 2022, in Geneva, Switzerland.

As the commission was not allowed to go to the war-affected areas of northern Ethiopia to investigate by the federal government, all the 185 interviews with victims, survivors, witnesses, and other key interlocutors were conducted remotely, it said. Even the governments of Sudan and Djibouti haven’t granted the Commission access to interview Ethiopian refugees within their borders. 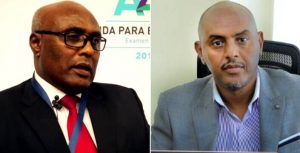 The commission’s requests to various UN entities operating in Ethiopia to share documents and materials of interest were largely deflected, or responded to after an inordinate delay. Its request to access the internal database of the joint investigation team was also delayed.

“Despite these challenges, the Commission is confident that its findings are supported by information that satisfies the standard of proof for UN investigations,” the report reads.

The commission’s recommendation, which asks the UN Security Council (UNSC) to include the war in northern Ethiopia on its agenda for the 14th time since December 2020, worries the Ethiopian government more than the report’s findings and conclusions do.

In order to stop further violations and abuses of international human rights law and humanitarian laws, it also calls on the council to take action targeted at restoring peace, stability, and security in the area. During a session held this week, officials of the federal government have already expressed their resentment at the recommendation of the commission.

“The Commission’s political pronouncements referring to the UN Security Council are ultra-virulent and betray political motivations that go beyond human rights,” Zenebe said.

It is a sentiment shared by countries that are members of the Human Rights Council.

“The Commission went beyond its mandate and made a statement on things that were not in its remit,” said Konan François, a representative of Côte d’Ivoire on behalf of a group of African States.

Wondemagegn Tadesse (PhD), an international human rights lecturer at Addis Ababa University, believes there are three options in which the UN Human Rights Council can decide to approve the commission’s report and recommendations. The first option is to end the matter within the council itself.

“In this case, there will be nothing more to do than call on the warring parties in the country to implement these recommendations,” Wondemagegn explained.

The second option is to refer the matter to the UN General Assembly. “However, since the assembly gathers over a long period of time, it may not have a big impact on Ethiopia,” he added.

Apart from that, even if it is presented to the General Assembly, its voting system does not have veto power, so there is a high possibility that it will not be approved. A large number of developing countries at the General Assembly will not vote in favor of the resolution as they consider such decisions as interference, according to Wondemagegn. Moreover, experience so far shows that if the country in which the decision is made does not accept the decision, the chances of its implementation are low.

However, if issues are referred to the UNSC, the third option may take a different path than the two options.

“The Security Council is the only institution that has the power to take military action among the UN institutions, but as we always see, the proposal to the Council is overturned by the veto power, so it does not make a difference,” Wendmagegn asserted.

In the past two years, the council has not passed any decisions on Ethiopia. The war in northern Ethiopia and the Great Ethiopian Renaissance Dam have been on the agenda tabled before its members for discussion. When a resolution was proposed, China and Russia, who have veto power, supported Ethiopia.

For Wondemagegn, even if the Security Council passes a resolution, it is difficult to implement it. If the Council decides to send troops to stop human rights abuses, there may not be many countries to contribute troops to a country as large as Ethiopia.

“Even if countries contribute soldiers and send them to Ethiopia, they will have to fight a war with Ethiopia because the Ethiopian government will not accept the decision. No one wants this,” he said.

Another human rights expert, who asked not to be named, explained that even if the UN Human Rights Council does not pass any decision as a result of this report, countries that want to take unilateral action can use it as a cause for their measures.

“Those like the US and the EU may use the report to suspend loans and impose sanctions,” the expert said, adding, “but this would only hurt the people affected by the war more.”

The Ethiopian Human Rights Commission also agrees with this idea.

“Decisions should be made to reward the people affected by the war and bring reconciliation, not where parties with differences of opinion are dragged into a corner,” said the Deputy Chief Commissioner for Human Rights, Rakeb Melesel, while underscoring that EHRC is ready to share its database if the Commission is willing to undertake another investigation.

The Ethiopian government is exerting pressure to block any attempts by the Commission to extend its mandate. “The Council should reject the report and oppose any attempt to extend the mandate of this Commission beyond December 2022,” the government emphasized.