– His speech misled the stock market

– M-Pesa yet to secure a license, despite assurance from the Ethiopian government

Securing a mobile money license in Ethiopia is expected to take several months, coming as a contradiction to the Ethiopian government’s remark stating the license has been granted, which sent a confusing signal.

Ahmed Shide, Ethiopian Minister of Finance, stated on October 7, 2022, “a deal has been reached between the government of Ethiopia and Safaricom to grant a license for mobile money service to Safaricom.” 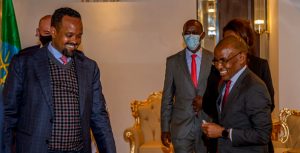 He made the statement during Safaricom Ethiopia’s launch ceremony at Friendship Square in Addis Ababa, in the presence of Prime Minister Abiy Ahmed (PhD), the newly elected Kenyan President, William Rutto (PhD), Peter Ndegwa, CEO of Safaricom Plc, and other top officials.

A day after Ahmed made the remark, Safaricom’s shares surged by more than nine percent in Kenya’s stock market on Friday, according to Reuters. The M-Pesa license is also estimated to lower Safaricom Ethiopia’s break-even time to two years from the five years previous target.

However, the minister’s latest remark is basically detached from the progress made by the National Bank of Ethiopia (NBE), which has the authority to license mobile money operators.

After Safaricom secured the first private telecom license in Ethiopia last year, the government promised to grant a license to M-Pesa, which is its subsidiary company. Safaricom’s M-Pesa is its most profitable service, which it hopes will help it compete with the state-owned telebirr in Ethiopia.

However, the NBE has to amend the existing National Payment System Proclamation, which was introduced in 2011. The draft proclamation has been finalized by the NBE but has not yet been ratified by Parliament, despite being approved by the council of ministers.

The parliament was in recess for two months and will be back this week.

Even after the amendment is passed by Parliament, regulations and directives will have to be approved before the NBE can start processing M-Pesa’s license.

Safaricom also did not formally request the NBE to process the M-Pesa license. However, insiders told The Reporter that Safaricom Ethiopia has already started developing backdoor software developments for M-Pesa.

An official at the NBE, who requested anonymity, says the minister’s [Ahmed Shide] remark came as a surprise.

“It is not a proper remark and it does not mean M-Pesa has been granted the license technically. In my opinion, the minister made the statement because he believed M-Pesa could make preparations in the meantime while NBE finalizes the legal preparations. It does not mean a license is granted, but promised,” said the official.

The official believes M-Pesa will be granted the mobile money license in Ethiopia only after fulfilling the requirements. “The legal amendments to decide the requirements are underway.”

The draft proclamation states a mobile money license will be granted within 60 days after an application for the license is logged to the NBE. However, M-Pesa cannot make the request before the proclamation is passed by Parliament and necessary directives are also introduced to enact the amended proclamation.

The amended Payment Settlement Proclamation was approved by the Council of Ministers recently but has not yet been tabled in the House of Peoples’ Representatives (HPR).

“Normally, the HPR can return a draft bill to us if there are certain inputs that must be included. But we believe Ahmed made such a bold remark because he believed the bill would directly pass the HPR without further delay. We expect the HPR will see the bill immediately after it returns from recess, probably after next week,” the official said.

The official said that once the HPR passes the proclamation, regulation, and directive, they will be issued immediately. “The NBE then begins accepting applications for foreign mobile money operator licensing. It will not take long because it is a simple amendment.”

Under the existing law, specifically the “Electronic Payment Issuer directive”, the minimum capital requirement for licensing of mobile money operators is 50 million birr. This is for local operators only.

“When it comes to foreign operators, the amount is in foreign currency. Therefore, there will be some adjustments in the amended law. There are also other changes in the new proclamation that foreign mobile money operators like M-Pesa must fulfill,” added the official.

Black January, a fuel for Azerbaijan’s...