In DepthLand privatization once again on the table

Land privatization once again on the table

Land privatization in Ethiopia once again on the table

Supporters of Prime Minister Abiy Ahmed (PhD) praise him for introducing the most liberal economic policies of any Ethiopian leader in the previous three decades. Officials who knew him prior to becoming premier refer to him as a man of privatization. He is well recognized for supporting a policy that favors liberalization, with the private sector taking the lead in this drive. For those who are close to the prime minister, the proposed sale of important public assets like ethio telecom and the opening of the banking industry to foreigners, while unexpected for the general public, are not surprising events.

However, everyone, including those in his circle, was alarmed by his latest plan to privatize land. “I am aware of the long-term strategy to gradually shift to a privately driven economy,” a member of the Prosperity Party (PP) and a representative in one of the public offices of the Addis Ababa City Administration said, expressing how the proposed reform had left him bewildered. “Land is rather sensitive, so it was never brought up at party meetings.”

However, none of the lawmakers were surprised when Abiy proposed that land should be privatized in urban areas. To say the least, his suggestion did not cause any commotion among MPs, in contrast to decisions that cause lawmakers to sound off in the middle of a session.

Even if this approach necessitates a constitutional amendment, it is a major development since the Abiy administration and a move that, if approved by the majority of Ethiopians represented by the House of Federation, might have an impact for generations to come.

“Brokers who provide no value and dishonest government officials are preying on land,” Abiy said, indicating the proposed reform to privatize land in Ethiopia.

Since the time of Emperor Haile Selassie I, Ethiopia has implemented different land policies. Urban land in Ethiopia was held in private ownership during the imperial era. But after coming to power in 1974, the Derge administration implemented a policy that enabled it to seize control of all urban land.

A new constitution was introduced by the Ethiopian People’s Revolutionary Democratic Front (EPRDF)-led ruling party, which overthrew the military government and placed land under public and governmental ownership.

The state and the people of Ethiopia are the exclusive owners of all land, both rural and urban, as well as all natural resources, according to the constitution. It is a provision that enabled the government to implement a system of holding urban land leases that permits the state to transfer land use rights to private parties.

Under the current system, which is based on a proclamation that was amended about 11 years ago, urban land is regarded as public property. Because developers only have the right to use the land for their own purposes and do not actually own it, they are only able to sell the property they have built on it.

Whether done intentionally or unintentionally, the legal provision effectively granted the government and its officials a monopoly over land. Developers have no right to assert their ownership of the land. If authorities decide that their land is required for development, even if they have already claimed ownership by building a house there, they may face demolition.

The legal loophole was also exploited by corrupt authorities to favor individuals who had bribed them or with whom they were associated. Land departments developed into places where officials might amass wealth by utilizing their public roles to acquire wealth from land that is not theirs.

Abiy, who just formed a new committee in the fight against corruption in the public sector, wants this to be changed. “We should develop a new system in the land sector, but in a way that does not harm farmers.” 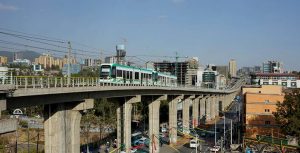 Ex-officials and other opponents of land privatization contend that the proposed policy shift should linger until the non-farming sector expands in order to accommodate and offer alternative livelihoods for rural residents without access to land.

They are concerned that if they do not, there will be an uncontrolled migration of people from rural to urban areas, which could lead to social unrest and even a political collapse in the country.

Biruk Shimelis, deputy manager of Flintstone Homes, disagrees. He believes private ownership of land encourages investment, which thereby positively contributes to the growth of the economy.

“The long-term goal should be privatizing all land, but it should start with the urban one to eliminate the perceived risk that farmers would sell their land and it would fall into the hands of a few if private ownership is allowed,”  Biruk said, praising the proposed idea by the Prime Minister.

Researchers suggest the current land policy has created a rent-seeking political economy. The government’s monopoly on property and the strong relationships between politicians, business partners, and banks have turned real estate into a haven for money laundering and corruption, while the majority of Ethiopians continue to be evicted and landless, according to research conducted by Misganaw G. Beza on urban land governance.

In addition to being a grave obstacle to urban land governance, this monopoly of land resources has also been a breeding ground for corruption and wealth concentration in the nation, particularly in urban areas, where landlessness is a serious issue. “Due to Ethiopia’s urban-rural horizontal expansion, inequitable urbanization has become a reality,” Misganaw said in his study.

Misganaw believes that despite legislative and institutional initiatives, post-1991 urban land governance leaves a gap for corruption due to its unclear provisions and opaque implementations, which draw many to engage in various malpractices like partiality, favoritism, working with shady brokers, and of course, corruption.

The researcher came to the conclusion that “the political economy of urban land governance, which endures the long tradition of state intervention and monopolization of land by the government, leads to state capture in the land sector that opens up a big room for corruption.” According to experts, this may be avoided by allowing private entities to hold land.

An expert in land use and management, Balcha Berecha, believes private land ownership would not only end the government monopoly in the land sector but also put brokers out of business.

Balcha was involved in the formulation of land use policy during the administration of former Prime Minister Hailemariam Desalegn. According to him, who thinks the existing policy exposes developers and property owners to eviction and expropriation, private ownership would stabilize the land market and increase investors’ confidence.

A government official who is a member of the ruling party argues differently. “Privatizing land does little to reduce corruption, as its contribution to boosting land supply is insignificant. Rather, the impact would be more psychological,” said the official. “And, if the policy shift wins the approval of the mass, it requires a lot of process, to say the least, and a constitutional amendment that may take years to happen.”