In DepthOromia in dire straits

Oromia, Ethiopia’s most populous zone, is reeling. People are losing their lives in broad daylight. Abduction is now the norm. The social bonds between the many ethnic groups in the area are fraying, and some fear it may soon break completely if left unaddressed. Once a hub of commerce and the breadbasket for Ethiopians in the central highlands and beyond, the region is now in the midst of a catastrophe of a scale never before witnessed.

It all started in 2016 after public outcry over a masterplan “to horizontally expand the size of Addis Ababa,” a protest movement emerged in the region and led to the destruction of billions of birr investment and death of civilians. This sparked a youth movement known as Qerro and, along with similar protests in other regions including the Amhara regional state, enabled Prime Minister Abiy Ahmed (PhD) come to power after the resignation of Hailemariam Dessalegn.

Then after, Abiy proposed a slew of reforms, one of which was a proposal to establish stability in Oromia. Everything would return to normal, he believed, once the youths and armed combatants with a cause to fight for Oromos came to the negotiating table. But it did take some time.

Abiy convinced the Oromo Liberation Front (OLF) fighters led by Dawud Ibsa to return home with the help of his former comrade, Lemma Megersa, and the current chief of Intergovernmental Authority on Development (IGAD), Workeneh Gebeyehu (PhD), who was a Foreign Minister after Abiy assumed power. As members of Ginbot 7, the OLF leaders were greeted by a huge crowd. They were both sent to Asmara, Eritrea, as exiles. More than 1,500 OLF soldiers have come home through the Tigray and Neqemte fronts.

Abiy’s government set up a facility to help rehabilitate the troops. That, however, was no picnic. More than half of them, led by Jal Marro (actual name Kumsa Driba), refused to join the camps, and even abandoned the political side of their party, which was headed by Dawud. When word spread that several soldiers had been poisoned while camped, more people joined his cause.

Many locals were against Jal Marro at first because, they argued, the unanswered questions of Oromos had already been addressed. But he refused, even going so far as to suggest that he would continue to fight for the monkeys in the jungle even if the Oromos are “liberated.”

Not long after, Jal Marro made it clear that he and the other fighters in the jungle were not affiliated with the party led by Dawud. This has been going on for four years, and it has become a major contributing factor to the killings of many people in the area. The Amharas were the prime victims, but the Oromos have also faced the same fate, as they were subject to an attack from groups that claim to be Fano.

There has been an increase in attacks on foreign investors. Foreign expats and locals working in factories have been kidnapped and narrowly escaped deaths. The government has labeled the Oromo Liberation Army (OLA) a terrorist organization, but kidnappings of manufacturing workers allegedly by the group continue to occur less than 100 kilometres from Addis Ababa.

Workers employed by Dangote Cement are the most recent victims. It happened to the workers at the state-owned Mugher Cement, too; the company’s deputy head was kidnapped on his way to Addis Ababa, and only after he paid a million birr to the armed men who held him ransom did he get released. A truck on its way to the capital was attacked a few weeks ago by armed men apparently working under OLA orders who had taken control of the Hawasaa Express Road.

Wollega Zone is the prime victim in the region.

Over 1,105 civilians have been killed this year, including 28 officials who were shot in one day in Wollega, according to a report presented at the close of the past fiscal year at the Oromia Regional Council, Chaffe. Over three billion birr’s worth of property has been lost due to the prolonged violence in the zone at the same time. Officials of Oromia report that eight of 20 Oromia’s zones are currently threatened by security issues, and that there is no assurance of safety in the remaining zones, even though they are generally considered to be safe.

“My mother lives in Dembi Dollo [part of Wollega] and I have not seen her for two years. When I gave birth four months ago, she tried to come but ended being abducted for almost a day and risked her life,” said an individual living in Addis and a victim of the security crisis. “They get electricity once a month and telecom services get interrupted for almost 24 hours every other day.” 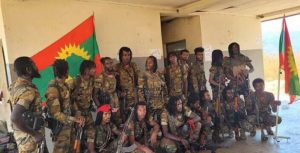 She is not alone. There is a danger of an investment flight from the region because many people are thinking about moving their businesses to a safer place, or possibly leaving the country altogether because of the widespread political unrest.

“The situation in Oromia is tarnishing the image of the country, on top of the security crisis caused by the war in Northern Ethiopia,” said a parliamentarian who talked with The Reporter on the condition of anonymity. Concerning is the situation growing in the south, as peace agreements made to stop the war in the north, and it continues to result in the deaths of civilians and the displacement of hundreds of thousands.

Many hoped that after the federal government reached an agreement with insurgents in North Ethiopia, the same would happen in Oromia, but there has been no evidence of this yet.

Jawar Mohammed, activist-turned-opposition figure, is among who urged all the warring parties to sit for negotiation. “Just as in the North, the cause of the civil war in Oromia is a political difference and it will only be resolved when leaders agree to sit around the table in order to discuss and bargain mutually acceptable compromise,” he said.

His party comrade, Mulatu Gemechu, senior leader of Oromo Federalist Congress (OFC), in which Jawar is a member, shares his view. “Despite the fact that four years have gone by with no success in bringing peace to the region, unfortunately, government officials believe they can end the security situation as they possess a military advantage over the militants,” said Multau, who believes peace, compromise, and settlement is the only way to end the security crisis in the region.

Even after creating an umbrella of parties in Oromia and pressuring all the warring groups to come to the negotiating table, Jawar and his colleagues failed in their attempts to broker peace between the government and the OLA. Officials are intent on trying to use internal divisions within OLA as an excuse to reject any dialogue with the group, which is now thought to be led by not only Jal Marro but also Jal Gemechu and Jal Segni in the region’s south and center.

“There may be disagreements within the OLA, but it shouldn’t be used as a reason to avoid peace talks with them. They have supporters, no matter how lofty or unattainable their goals may be,” said Lemi Sime, a political commentator and a conflict resolution expert.

Abiy discussed the government’s position on OLA and the ongoing war against its combatants during his latest appearance before the Parliament. Since there is “no central command and ungovernable for its own leaders,” it is difficult to sit down and negotiate with the combatants, the PM said. He reiterated his administration’s stance, saying, “The door to a negotiated settlement remains open.” This stands in sharp contrast to what the Oromia Regional Government’s official said earlier this week.

Oromia Region’s Senior Official, Hailu Adugna, firmly rejected the proposal to sit for negotiation and vowed that law enforcement measures would continue to be taken against the rebels, whom he blamed for destabilizing the country through atrocities and other types of destruction. “It’s not possible to negotiate with outlaws,” he remarked.

Peace talks between the OLA, the federal army, and regional state security have been ruled out by the Oromia regional state on the grounds that the OLA has “no chain of command and divided along regionalism,” and “is unorganized and lacks purpose and leadership organization,” claims that the OLA’s international spokesperson has refuted.

For peace to prevail in Oromia, the government must employ hybrid approach, according to Lemi. “While I agree that authorities should crack down on bank robbers and civilian killers, I also think it’s important to sit down and talk with OLA’s top brass. In spite of their internal divisions, everyone knows who is in charge of each front,” he said. “Failure to do so will generate further communal bloodshed as the armed group seeks to show the government that it exists.”

Another expert in resolving conflicts and fostering peace says that eradicating guerilla warfare in Oromia requires looking into the genesis of the armed groups that have been fighting there for so long. “The government must officially invite the leaders of the OLA to negotiate a peace agreement and recognize them as a political body, similar to how the TPLF is treated in North Ethiopia. To compensate victims and prevent further retaliation, transitional justice is also essential.”