It turned out that a crackdown on corruption from the top down was the most compelling political story of the week among high-ranking government officials. Those with extensive experience in the industry are rushing to defend their networks, even if it means putting other networks at risk. Even the killing of hundreds of people in Wollega seems to be of secondary concern in comparison to the crackdown on corruption.

Just a few short weeks after the Tigray war came to a peaceful conclusion in early November, Prime Minister Abiy Ahmed (PhD) announced the formation of a seven-member national anti-corruption committee. Among the committee’s members are Gedion Timothewos (PhD), Minister of Justice, and Temesgen Tiruneh, Director General of the National Intelligence and Security Service (NISS).

In a manner that was remarkably similar, both the state administrations and the federal administrations at the various levels each established their very own anti-corruption committees. In the wake of the Tigray war, it was widely believed that the government would be preoccupied with gathering resources for the reconstruction effort and mending diplomatic ties that had been damaged during the conflict in order to rekindle the interest of potential investors.

But corruption weighed more and required immediate action; as a result, Abiy has been rolling out a nationwide anti-corruption campaign ever since he came to power four years ago. Many people are of the opinion that the Prime Minister was aware of the grand corruptions committed under his administration but he was unable to take action because the government’s top priority over the past two years has been the fighting in Tigray.

The Anti-Corruption Commission was unable to keep up with the enormous amount of corruption that has grown over the past couple of years, thus the Premier was required to organize a new anti-corruption committee. In the past two years, the federal government, the Amhara, Tigray, and Afar regional governments have all been engaged in conflict. 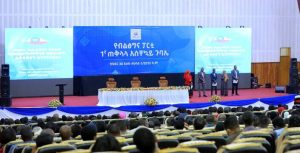 The national committee has already placed a freeze on suspected bank accounts, and some of these regions have even placed a freeze on the transfer of property. In Ethiopia’s politics, this kind of crackdown from the top down is nothing unusual. During his six years as Prime Minister, Hailemariam Desalegn is remembered for two particularly harsh repressions.

But in the end, Hailemariam admitted that he was unable to lead the country due to the massive corruption network and state capture, and finally turned over power to Abiy in April 2018. Even the late Prime Minister Meles Zenawi carried out a major crackdown at one point.

The anti-corruption campaigns of successive Ethiopian regimes had one thing in common: they were all motivated by politics, a political commentator said. “A crackdown on corruption is either a sham designed to protect the powerful few, or an instrument of political purge. In the second scenario, little officials and business people are imprisoned while the top authorities are saved and even spearhead the anti-corruption drive. No Ethiopian regime ever showed any seriousness about fighting corruption,” he said.

The expert fears this campaign will fail to eradicate corruption if it focuses on minor offenders while leaving the major players unharmed. “A committee’s power is limited and cannot be used against the larger fish. There are certain authorities who have joined these anti-corruption panels despite a reputation for corruption.”

The administration of Prime Minister Abiy appears certain that his latest anti-corruption campaign is genuine. The Prosperity Party has been having discussions over the subjects of reshuffle and corruption.

According to an individual who talked with The Reporter, intelligence and security agents have been gathering information on corrupt regional governments and federal high-level officials for some time and have notified the Prime Minister. The fact that the prime minister began by imprisoning the head of the Financial Intelligence Center was also a sensible move, according to the insider.

According to credible information gathered by The Reporter, Abiy instructed all regional states and the two administrations to establish their own anti-corruption committees. These committees perform a “thorough evaluation” of regional officials. However, the prime minister allowed exceptions for the regional presidents and vice presidents, as well as the mayors of the two administrations. The prime minister stated that he would examine the presidents and mayors directly.

“The PM concluded the corruption in these regional states cannot be solved as long as the officials are there. Hence, they will be reassigned to federal positions or sent on diplomatic missions,” the official who spoke to The Reporter said.

Insiders dispute the claim that corruption rose in regional states not directly involved in the Tigray war and has been stable for the previous two years because the federal government was preoccupied with the war.

“First, the EPRDF regime’s corruption network was active. Monopolizing commodity supply chains, favoring procurement awards, land grabbing, Togo Chale, and others are the same corruption schemes as the EPRDF. Only the names changed,” claims an official.

Especially Somali, which is the main gate valve of Horn of Africa’s corruption inflow into Ethiopia, has become a lucrative business for top PP officials at federal and regional levels. The PM listed five major corruption schemes in the Somali region during the PP meeting a few months back in Jigjiga.

“Togo Chale remains the Achilles heel of Ethiopia’s economy. We know this huge corruption network is protected by officials,” said the PM.

Previous article
“The problem in Ethiopia is not how to handle diversity, but how to handle competing identities”
Next article
Energy crisis in Europe boosts flower exports
- Advertisement -