The events that took place in Tigray this week not only made those who had been longing for peace joyful, while also shocked everyone who had been following the situation. Everyone in Ethiopia, from ordinary citizens to high-ranking officials involved in the battle, was taken aback by the string of measures that were taken to maintain the calm that had been secured in North Ethiopia. Debretsion Gebremichael (PhD), the head of the administration in the region that is run by the Tigray People Liberation Front, has referred to the current situation as a miracle. 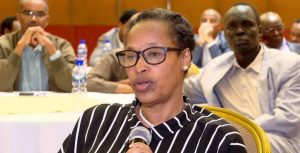 Just one day after more than a dozen officials, led by Tagesse Chaffo, speaker of the parliament, went to Tigray without even bringing their guards who travel with them in every day of their activities, flights to Mekelle resumed, which was followed by the resumption of telecom, banking, and internet services across the war-torn region. All of these developments occurred in just one week. It was a positive development for many who had been urging a halt to the two-year conflict that had claimed the lives of at least 600,000 Ethiopians.

While many Ethiopians were preoccupied with the fruits of peace that had been born in the northern part of the country, opposition groups were grilling officials who had participated in the negotiation process. No private media outlets were invited to cover the event at the Inter Luxury Hotel, which was attended by more than 50 political parties. Angry opposition party representatives confronted Redwan Hussien, an advisor on security matters to Prime Minister Abiy Ahmed (PhD) and the key figure leading the peace efforts in North Ethiopia on behalf of the federal government, and voiced their displeasure at being left out of the negotiations. There were other groups who appealed for the window of peace that was prevailing in the north of Ethiopia to blow in the south, in an effort to put an end to the ongoing conflict that was taking place in Oromia and other regions.

Wolkayit, puzzle yet to be solved

The question of Wolkayit is undeniably the most significant barrier to peace in North Ethiopia, and if there is any other barrier at all, it was the one that prevented those who were seeking to create peace from achieving it. Although long overdue, the opening of the humanitarian corridor and the return of essential services did not take this long to materialize. The fact that the problem has not been resolved to date worries everyone who wants guns to be permanently silenced.

Amhara and Tigray political elites continue to disagree about who should own Wolkayit and the neighboring towns that were administered by West Tigray Zone before the war in North Ethiopia broke out. The Amhara people think that Wolkayit was forcibly annexed into Tigray by the Tigray People Liberation Front after the military regime in Ethiopia was overthrown in 1991.

On the other hand, the Tigrayans believe that the contested areas have historically been theirs. The withdrawal of Amhara forces from these areas was one of preconditions brought by the TPLF long before the AU-brokered peace realized in Pretoria, South Africa, though its official compromised their firm position over the matter after the federal government pledged to resolve this using the constitution.

Demeke Zewdu, a major member of the movement to push the federal government to incorporate Wolkayit into Amhara Region, has stated on multiple occasions that he believes the matter ought to be settled politically rather than on the basis of the constitution. On the contrary, the TPLF wants everything restored to pre-war. During the event held between political parties and the leader of the peace efforts on the behalf of the federal government, the same argument was entertained on the floor.

Chane Kebede, the chairperson of Ethiopian Citizens for Social Justice (also known as EZEMA), among who expressed his concerns over the unresolvedness of the boundary dispute in North Ethiopia, not only between Tigray and Amhara regions but also between Tigray and Afar. “What the government doing now is comparable to smothering flames that could erupt at any moment,” Chane said. “The issue was supposed to be addressed in the peace deal.”

Except for its first statement supporting the peace initiatives, the Amhara Regional State has been silent on the topic. The same is true for Afar, which claims areas that were previously administered by Tigray Region but were allegedly taken by the TPLF in the 1990s and wants them returned to its control. Redwan, in response to opposition parties’ inquiries about the peace process, accused oppositions of pushing federal authorities to comment on the subject, which could jeopardize efforts to end the war permanently and irritate parties with an interest in the matter.

Exclusion of the elephants in the room, a perilous outlook

Negotiators at the African Union tried to include Eritrea, one of the parties to the conflict in North Ethiopia, in the mediation efforts to end the war in North Ethiopia almost the same time they have approached the officials of the federal government and the Tigray People Liberation Front.  There were reports indicating the AU tried to approach officials of Eritrea to participate in the negotiation, though nothing has been said by Eritrean officials over the matter.

The AU also chose to remain silent over Eritrea’s exclusion, with the exception of calling for the withdrawal of foreign soldiers from Ethiopian territory. The same holds true for Amhara and Afar. Given that they are a part of the federation and represented by the central government, AU officials may assume that they are already represented by the federal government. Regardless of their views, opposition parties feel this “ignorance” could lead to another war if it remains unresolved.

“The Amhara and Afar people, who are equally impacted by the war in North Ethiopia, would have been consulted and were supposed to be the part of the peace efforts,” said Seifeselassie Ayalew, president of Enat Party, citing what happened after the federal government made a deal with the Oromo Liberation Front in Eritrea. “We don’t know what was signed in Asmara and look what is happening now. Because the devil is in the details, the public should know clearly about the agreement”

“Peace is indivisible,” remarked a furious Mulatu Gemechu, urging federal government officials to replicate their efforts to bring peace to Tigray in Oromia. Mulatu looks disgruntled as he explained his dissatisfaction during the event held last week between the oppositions and the federal government. “Oromia is bleeding and people are being killed every day because of a senseless war that could have been resolved by compromise and settlement between the warring parties.”

Beginning in Wollega Region, scores of communities throughout Oromia, from Shewa to Guji, are becoming conflict hotspots. Moving between cities has become a difficult task. Abduction has become the norm in the region, even in cities close to the capital. Armed groups are becoming predators of civilians. During his most recent appearance before the parliament last month, Prime Minister Abiy Ahmed stated that the door is open to anyone ready to negotiate, but indicated that “the lack of central leadership in Shene has made it difficult to sit for dialogue.”

“The lack of central leadership cannot be an excuse to achieve peace in Oromia,” said Mulatu.

Gebru Asrat, a seasoned politician and member of the Arena Tigray Political Party, made the same appeal as Mulatu at the event.

Previous article
“We are still not benefiting from the dividends of the reform,”
Next article
War leaves eight million Ethiopians aid-dependent
- Advertisement -