In DepthStriking a balance between ethnic diversity, national unity

For the past three decades, the topic of ethnicity and land in Ethiopia has gone unaddressed under both the unitarist Derg and the federalist regimes. The conflict between group-identity politics and citizenship politics has evolved into an armed struggle, exacerbated by a weak power structure and a democratic deficit.

War is still raging in western Ethiopia, driving the federal government into another chapter of chaos just two months after successfully ending the war in northern Ethiopia. In contrast to the Tigray war, the fighting in Oromia is both vertical and horizontal.

The militants, dubbed “OLF-Shene” and “Amhara-Shene” by the government, are fighting both the government and each other. Before Prime Minister Abiy Ahmed’s (PhD) coming to power in April 2018, the militant troops were based in Eritrea, fighting with the Ethiopian People’s Revolutionary Democratic Front (EPRDF).

However, after relocating their bases to Ethiopia, the nature of the conflict shifted to controlling the areas constitutionally assigned to ethnic groups. In fact, non-territorial tribes or other ethnic groups living in areas owned by another regional state have no power under the constitution.

Individual rights have lost ground in recent years as ethnic rights have been increasingly deconstructed and echoed.

The primary cause of various ethnic battles in the last five years, including the Oromo-Somali conflict, the Guji-Gedeo conflict, the Tigray-Amhara conflict over Wolkait and Raya, and the Oromo-Amhara conflict in Wollega, Shewa, and Wollo, has been territorial ethnicity claims. The conflict in these places was aimed at expelling non-territorial ethnic groups and changing the area’s population.

Land and resources remain central, and various ethnic groups are waiting for referendums to form regional nations. For example, as a result of a dispute and social movement over claims to become a regional state, the Gurage zone is currently managed by command post.

Regional states have the right to self-determination under the current constitution and federalism model. However, the majority of the political elite argue that the constitution is the primary source of the unrest shaking the country to its core.

The Ethiopian Academy of Science (EAS) is one of the institutions concerned about the country’s escalating ethnic strife.

Throughout the week, the academy organized and hosted an in-depth conversation on the topic of ethnicity, in which more questions were raised than addressed. The current constitution and Ethiopia’s federalism based on ethnicity, according to the majority of academics there, are pulling the country apart rather than bringing it together.

“The constitution talks about the self-determination of ethnic groups up to secession. This is very bad and hinders nation-building,” Yacob Arsano (PhD), political science lecturer at Addis Ababa University (AAU), says.

This has put Ethiopia’s federalism under significant strain, according to Yacob, who was also one of the government’s experts on the now-defunct Administrative Boundary and Identity Issues Commission.

Yacob is also dissatisfied with Article 2 of the constitution, which specifies that the country’s border is also the border of the member states.

In this regard, the context is that Ethiopia was founded as a state with the approval of the nine regional states, which now number ten, and other ethnic groups are in the process of establishing regional states.

Scholars contend that it is a “holding together” rather than”coming together” federalism. According to scholars such as Yacob, granting ethnic groups ultimate power is the incorrect assumption for forming a state. 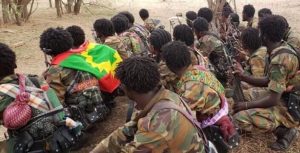 “For any state, whether it is a federation or another form, having its own land and its own boundary is the first priority. Attaching the land to ethnic groups alienates the territorial integrity and national sovereignty of the country,” Yacob said, adding, “The constitution is flawed.”

He believes that national territorial integrity and sovereignty come before the recognition of member nations. He further contends that, unlike Ethiopia, federalist governments such as Nigeria lack the authority to establish their own police forces.

Ethiopia’s federalism format is a “give-away” federalism and has a constitution that allows secession, says Asnake Kefale (PhD), a political science lecturer at the AAU who also led the discussion on federalism at the EAS. “This cannot help with nation-building and maintaining a strong state. A centralized system is needed to ensure good governance and equal development among others.”

While intellectuals advocate for centralized governance and the eradication of ethnic-based constitutions, the elite has no other option for dealing with diversity. In truth, no country has ever been developed by eradicating diversity. However, federal systems such as India maintain both unity and diversity through shared vision, integration, development, and democratization.

According to Yacob, the pursuit of nationalists in Ethiopia is not inherently improper, but the way in which it is carried out is. He claims that Ethiopia’s elites, in particular, have failed the country. “The Ethiopian elite are passionate but lack knowledge.”

Several opposition party leaders have also claimed that power struggles inside the ruling party are to blame for Ethiopia’s continued ethnic conflict.

“Ethnic diversity has never been a problem in this country. This population has a long history of uniting in arms to fight external enemies. That is how Ethiopia remained uncolonized,” a political analyst who spoke to The Reporter on condition of anonymity said.

“No one can teach this nation how to unite, but the so-called politicians who are ruling this country are deploying the ‘divide and rule’ strategy to stay in power,” the analyst added.

The analyst believes political leaders lack ideology to elevate the nation. “That is why the problem of Ethiopia has slipped back from a question of nation-building to one that risks the very formation of a state.”

The Horn of Africa countries are all the products of a colonial-era drive to control Africa. Because colonists imposed arbitrary borders, most ethnic groups in East Africa are distributed across numerous nations, making state formation problematic.

Because it is difficult to remove the impacts of colonialism, it is critical to provide a home for all ethnic groups in the country rather than attempt to create a state-nation out of a country like Ethiopia, which has more than 80 separate nations and ethnicities.

However, the political expert believes that Ethiopia can strike a balance between its diverse ethnic groups and its need to be one country.

From a development perspective, both the unitarian and federal systems can do more, but only if there is democracy and equity, according to the analyst, who says there is not much difference between the unitarist and federalist political forces in Ethiopia.

“Both camps have the same aim: political dominance over one another. All of this, however, is a narrative created by political elites, not ordinary people. Identity is dynamic. If the people could see a better identity and virtue in Ethiopianism, they could blend into that national identity without a need for war,” says the political analyst.